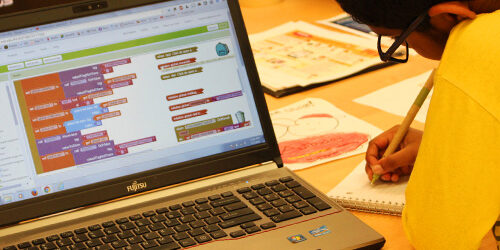 Of the many kid-friendly programing languages in the market, you must be wondering “why Scratch?”.

Before we try explaining, let’s take a reminder on what programing languages really are, and why they are beneficial to children. Truth be told, there are thousands of ways a child’s mind could be harnessed to achieve max potentials. Of them all, introducing your children to coding has to be atop the list. That’s funny because until recently, coding was perceived only as an odd hobby for nerds or specialized professionals. Now, with steady surges in use of electronic systems, it just might be a crucial skill for the future. Coding (or programming)  is a way, the only way, one gives instructions to electronic systems. We’re talking about the future here, so today’s children are the best bet catch on.

Of course, introducing children straight away to the complex programing languages isn’t quite practical. Chances are they’d simply be racking up program commands in their mind without really wanting to understand what they do. Let’s not even talk about trying new methods. Program developers, like those at MIT Media Lab who recognized this slight setback immediately, went to work and have come up with a solution. Scratch!

Scratch is an open-source visual programming language developed for children ages 8 – 16 years. It was developed by the Lifelong Kindergarten Group to help children grasp the concepts of programming; although we’d say it teaches a lot more. Unlike most “adult” program languages, it teaches without keeping children up all night fixing bugs from syntax errors. Don’t get jealous, they’re kids.

You read the first part right. It is a “visual” programming language. To put it in context, a Visual Programming Language (VPL) is one which enables users to manipulate characters graphically rather than textually. Scratch, therefore, is used to develop simple games in scratch, stories, and animations by dragging standard blocks of code from already-programmed scripts. These blocks of code such as move, rotate, and invert commands can then be numerically adjusted to develop the animation; the concepts of programming!

Simply said, (let’s forget definitions for a moment) Scratch eliminates robot tendencies associated with learning text program languages while retaining the concepts of programming – logic application and problem-solving. That explains why it is so popular. As at April 2020, usage stats from the program website showed a total of 52 million projects from 54 million users. It’s all over the world! In different countries; from users and educators; schools and colleges; so much so that it has prompted translation to 70+ languages. There’s a spot for everyone.

OVERVIEW OF THE SCRATCH ENVIRONMENT

The workspace for the programming IDE (Integrated Development Environment comprises nothing but a creative blend of colors and shapes which are essentially sure to grasp the attention of children. Once they are “grasped”, the rest is easy. The children (or any user really) is primarily concerned with manipulating all of the following:

Competitions bring out the best in everyone, and the developers of Scratch look to push children to be the best they can.

In that regard, the Scratch platform incorporated several in-house contests including; Scratch Olympics, Scratch Cup, ScratchOff, Scratch Championship, Art Contests, and Coloring Contests; where Scratchers could compete for many prizes. These prizes all including love-its, art requests are the rewards for ingenuity and form basis for judging by the organizer.

As much as few Scratch competitions are in-house, a few times they hold on a much larger scale; worldwide actually. It may sound a bit overboard but we are talking about children development here! Scratch takes that very seriously. The large-scale exposure to the minds and capabilities of children all around the world in no small measure pushes children to do better. A few such regular competition names with that aim in mind include the Scratch Olympiad and the DIS-CODE International Scratch Jam.

We all know that having our kids learn programming ensures a future of great opportunities for them. Scratch introduces them to programming without the usual drags of a million possible syntax errors. But that is it’s most basic advantage. There are more things children stand to gain from coding in scratch.

What Hand-on-skills Help You Thrive In Computer Programming?
November 15, 2022

How Short Online Coding Courses Are Beneficial for Kids
October 12, 2022

Take your Coding Skills to another Level with these International Competitions
April 13, 2022